The Fifth Sanctuary in Parliament Event: Towards a Fairer Asylum System 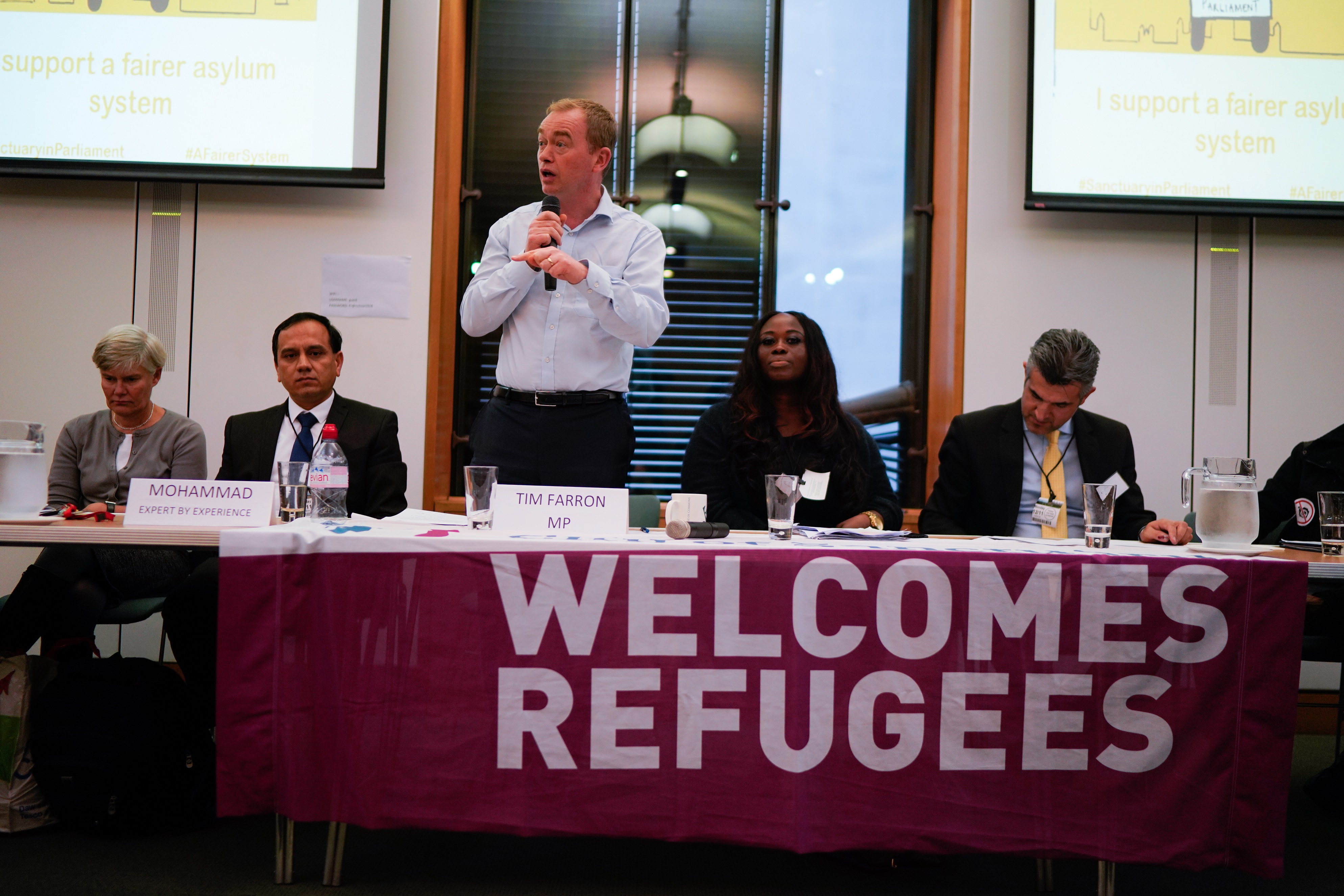 Around 40 MPs and members of the House of Lords joined sanctuary seekers and their supporters advocating for a fairer, more compassionate asylum system in the UK at the fifth Sanctuary in Parliament event on Monday 12th November.

The event, held in the Attlee Suite, Portcullis House in Westminster, provided an opportunity for sanctuary seekers to share their experiences alongside MPs. The testimonies from the ‘Experts by Experience’  were extremely powerful, moving and informative. Also, on the panel were Kate Green MP for Stretford and Urmston; Stuart C. McDonald MP for the Cumbernauld, Kilsyth and Kirkintilloch East constituency and Tim Farron MP for Westmoreland and Lonsdale. The campaign event focused on three key policy issues:-

The day-long event, which attracted groups across the City of Sanctuary network was hosted by Bristol West MP Thangam Debbonaire, Chair of the All Party Parliamentary Group on Refugees (APPG), and the Brighton Pavilion MP, Caroline Lucas, Vice Chair, APPG. 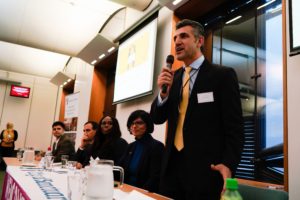 Sabir Zazai, Chair of City of Sanctuary, opened the event by welcoming everyone and thanking all those involved in organising the day. Most importantly he applauded the sanctuary seekers who had agreed to speak out. He said, “I would like to give special thanks and encouragement to our panel of experts by experience. It’s powerful and moving to hear directly from people who have been affected by these policies. I know how difficult it is to share your story. We must not remain silent but continue to speak out against this inhumane asylum system.”

Mr Zazai was followed by Thangam Debbonaire MP who in her opening remarks welcoming participants said, “I encourage you all to show your MPs that these issues matter to you. We need Government to help us rather than being a block.” 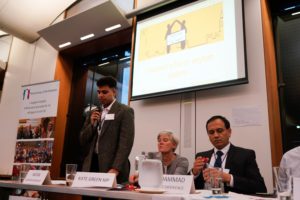 The panel session was opened by Safian, a 24 year old asylum seeker who has been waiting 7 years for an asylum decision. He spoke powerfully about how the inability to work had impacted him, his mother and his two brothers. Safian said, “Since I’ve been here, I have wanted to make a contribution to society but have not been allowed to because of the work restrictions for asylum seekers. This is very frustrating for me as I have a lot to offer.” Safian was followed by Kate Green MP who also stated that the UK asylum policies were ruining our international standing. Ms Green said that it is a double standard that Britain is trying to force Jordan to allow Syrian refugees to work while preventing our small number from doing so here. Ms Green referred to the no right to work policy for asylum seekers as “economically illiterate to waste so much talent.” 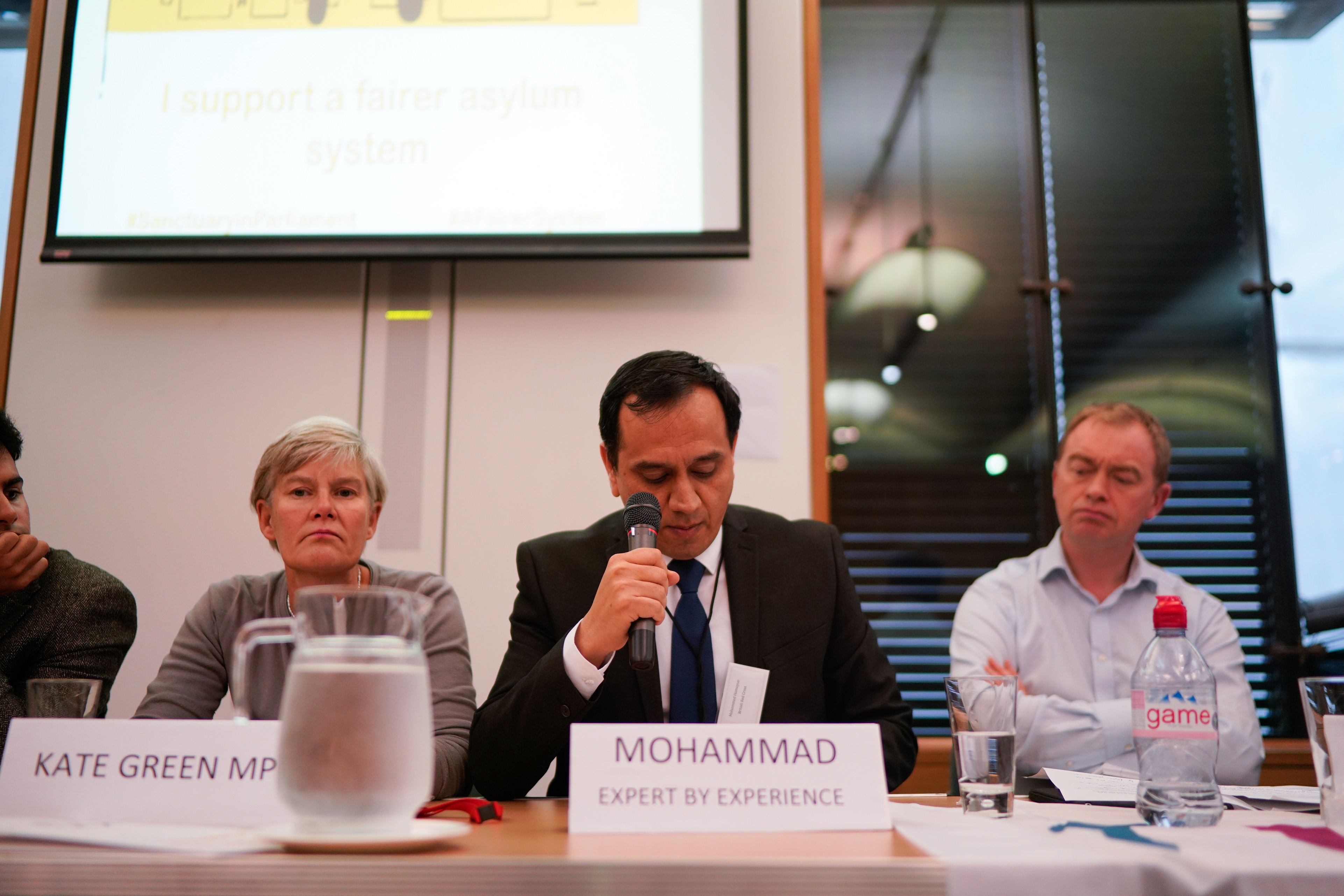 The next expert by experience, Mohammed, followed on from Ms Green, and talked about his experience of being without his family, pointing to the barrier of the lack of legal aid which is preventing refugees from being reunited with their loved ones. Mohammed summed up the argument for an extension to family reunion rules succinctly and poignantly, “Family is in our DNA.”  Stuart McDonald MP,  the Scottish National Party Spokesperson on Immigration, Asylum and Border Control, said it was “a wonderful event” and that no one should have to make a choice between seeking safety and being with their family.

Stuart McDonald MP was then followed by Mishka from Freed Voices. Freed Voices are a group of experts by experience dedicated to speaking out about the realities of detention and calling for radical detention reform. Mishka provided the audience with an overview of detention policy, he pointed to the inhumanity of detention policy, explaining that, “Between our group members, we have lost 20 years of our lives to immigration detention in the UK.” He also expertly explained the economic arguments for a 28 day time limit and reminded us that the UK is the only country in Europe that has no time limit on immigration detention.  In following Mishka, Tim Farron MP commented with reference to detention centres being managed by private companies, that the system is, “out of control and the lack of accountability is deeply concerning.” He also referred to the difficulties of accessing detention centres as “deeply troubling.”

As well as having experts by experience on the panel, Sanctuary Ambassadors were given the opportunity to ask questions directly to MPs. This ensured that the voice of sanctuary seekers were at the front and centre of the whole event. Ghassan, a Sanctuary Ambassador, talked about the complexity of family reunion cases and the lack of legal aid and asked what could be done. He also enquired as to how the panel would respond to the arguments that more children would be sent on dangerous journeys to seek safety if the family reunion rules were extended.  In response, Tim Farron MP stated that there was no evidence that children were being sent on dangerous journeys for this purpose and in fact there is evidence is to the contrary. He also stated it was immoral to use children who had already arrived here as a deterrent by refusing them access to family reunion.

Another Sanctuary Ambassador, Anju from Leicester, asked the panel to comment on the possible proposals that the Government’s might pilot to alter the automatic right to bail at two months instead of the current four months. Anju raised concerns that even if there was an automatic right to bail at one month, it should not be seen as an alternative to a 28 day time limit. Anju explained her personal experience of detention was that when she was in detention and applied for bail, it was refused because the Home Office said that “I was at risk of absconding because I had not been compliant. This was not true and they had no evidence to prove it but there was nothing I could do in the face of this injustice.” Anju said that, in her experience, it appears as though the Home Office Immigration Officials are not accountable to anybody for using inaccurate information against her.

Mr Farron referenced the powerful nature of the questions coming from the Sanctuary Ambassadors and concurred with  Anju that an automatic right to bail at two months was no substitute for, or indeed an alternative, to a 28 day limit. Mr Farron responded to Souvik, a Sanctuary Ambassador from Bristol, who had raised the issue that people were being paid £1 per hour for labour in detention centres, by saying it was “immoral, and against human rights and against the values of our country” and an “absolute disgrace, an insult to their dignity and affront to all of us.”

Mr Farron, in response to Mohammed’s moving statement regarding the pain and suffering his family endured, said he was “absolutely sorry on behalf of my Government for what happened to your family.” Moving forward, Mr Farron says, “we need to win these arguments and we need to win them wisely.” He said, “We need to get our hands dirty to work with the Home Office to make the asylum system a fair and humane process.” He pleaded with delegates to think carefully about the language we use when taking these issues to MPs. Mr Farron referred to the importance of the dignity of enabling someone to provide for one’s own family and that felt that many MPs would get on board. 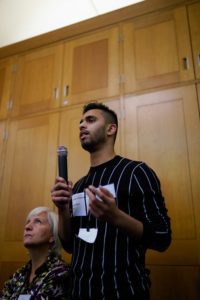 Another young sanctuary seeker explained that whilst he had been given a scholarship to study, at the end of his course he had to turn down a job offer which would have enabled him to pursue a career as he didn’t have the right to work. One sanctuary seeker observed with audible desperation, “why use your money to teach or improve our skills but not let us use them?”

The Experts by Experience on the panel and the Sanctuary Ambassadors, ensured that the morning session laid bare the inhumanity and the unfairness of the asylum system. Despite their painful experiences they were prepared to speak out, share their stories and join together with others to call for change – we thank each and every one of them for their courage. 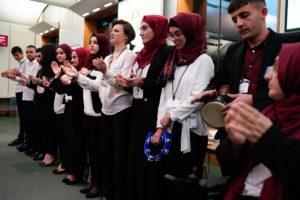 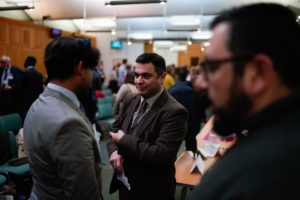 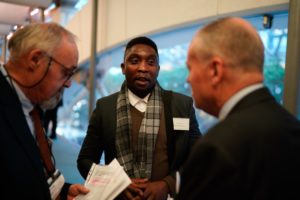 The afternoon session provided opportunities for networking, led by the fantastic Sanctuary Ambassadors and were interspersed by the screening of short films on  Family Reunion, No Right to Work and Detention:

Surviving to Thriving film on the Right to Work

28 Tales for 28 Days film on Detention

The story does not end here – it was a hugely successful event but this is just the beginning, it is imperative that we all work hard to keep up the momentum. There are urgent things we can all do and this article discusses how we can take the event forward.

Finally, a thank you to all our groups, partners, attendees and especially the experts by experience on the panel and all our Sanctuary Ambassadors for making the event such a massive success.

There are more pictures available here.