Penally – a Story of Solidarity and Victory

“It has been the best time of my life. It’s been absolutely incredible to meet these people and experience their beauty, their strength, kindness and softness.”

This is the brief story of the new group Pembrokeshire County of Sanctuary which sprung up around the Penally Camp, where the Home Office housed 250 single men seeking asylum for six months, against advice and without any consultation. A strong national campaign developed to close this (and Napier Barracks) due to its unsuitability, prisonlike conditions, lack of safety, overcrowding, poor food and lack of access to cooking facilities, and deliberate isolation. Penally finally closed in late March. 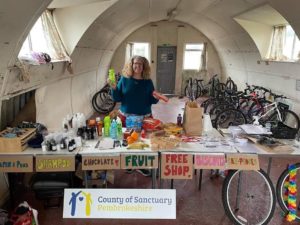 A network of grassroots organisations sprung up in solidarity with the men in Penally and managed to undermine the Home Office intention to isolate those seeking sanctuary from the local community.

“They closed it because it failed to create the expected social divisions.” 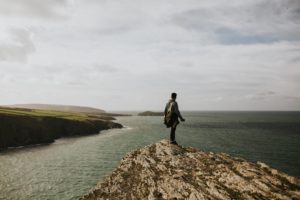 A moment of peace and freedom for one resident on a Sanctuary day out.

The new group  embedded themselves into the values and culture of City of Sanctuary by recognising that they were working “with” the men at Penally and not “for”  – beautifully blurring the lines between volunteer and resident. In fact volunteer isn’t even seen as the right word – “We were all part of the same gang – a community together”.

“No one wants to be the recipients of charity but to be seen as an individual on the same level as another person.”

The work developed with a mutually supportive & caring ethos ensuring the wellbeing of everyone.   A 24-hour helpline was developed and staffed by volunteer counsellors and online coffee shops signposted and helped to process secondary trauma responses. Care for the community of volunteers and the men at Penally was a priority.

“Hayley ( the CoS UK Wales Coordinator) has provided amazing support right from the start. She kept us informed, checked in regularly, was never pushy, provided guidance . . .  she protected us and supported our own wellbeing.”

“There was a real sense of an emergency. We felt it was our responsibility.” 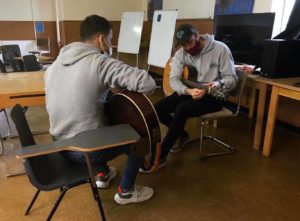 There were key decisions made in the first week of rapid learning by people who knew nothing about the asylum process. They wanted to scream from the rooftop “This is hideous!” but decided to remain publicly nonpolitical so that they could maintain a good working relationship with Clear Springs (who managed Penally) and this ensured ongoing regular access to the site.

People rallied round in solidarity, and the core group worked their way through safeguarding issues into the small 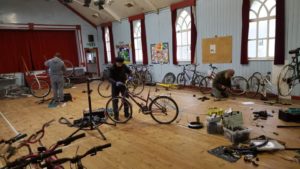 hours, navigated relationships with a variety of organisations including the local authority and prepared to protect themselves from the far right. Initially strangers to each other, they built a web of connection and developed a sense of appreciation of their own privileges and their opportunity to build solidarity and welcome, perhaps heightened by the isolation that the pandemic brought to each household. “It was as if we had a licence to put this in place that maybe we wouldn’t have had if all the NGOs and systems had already existed here.” 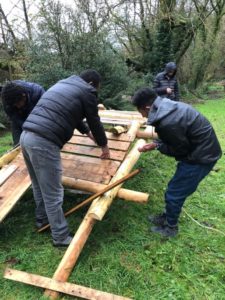 Building Bridges Arts project at one of the Sanctuary days

By the end of that first month the group had created:

The men seeking sanctuary lived in Penally for a period of six months and the incredible response which was up and running within the first month reflects an extraordinary community energy and commitment to welcome. County of Sanctuary Pembrokeshire eventually grew to over 150 volunteers as people responded to the sense of emergency, learning together through a labyrinth of communities and skills and viewpoints. 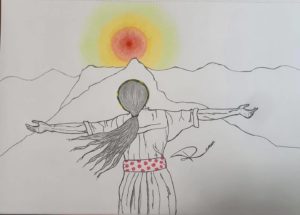 One of many powerful drawings by artists in the camp, posted by Art is an Avenue.

Hesitant members of the community gradually began to meet people on the beach or in the village, barriers were broken down and more and more people wanted to be involved. Donations rolled in ensuring the men had access to earphones, dictionaries, toiletries, clothing, gym equipment, bikes and more.  As others became engaged, new groups emerged and a range of activities developed including music and arts. Donated guitars and art materials were taken in to support the residents to express themselves. A powerful art project was instigated by  Art Is an Avenue which posted an incredible range of artwork online created by the residents. This body of work will be exhibited in the National Museum of Wales, Swansea in the summer and curated on the arts pages of the City of Sanctuary website as a valuable case study of #SanctuaryinArts in action.

The Heart of this Story

The Camp Residents of Penally – CROP – the internal union of men living in Penally – now called Life-seekers  were crucial to the community response and the Pembrokeshire group saw themselves as mutual collaborators with them. For the Sanctuary Days, they compiled lists of men to join and got everyone out of bed and in the minibus on time. Penally residents organised their own English classes and were buddies and mentors in their own right. A key part of the  narrative of Penally was that the men themselves were ambassadors on how to survive initial accommodation and as people seeking sanctuary, they taught the local people so much about community and connection.  Now dispersed, many still remain in the Pembrokeshire County of Sanctuary advisory group and continue to advise on developing projects. For example the gym equipment bought for Penally residents have been sent to Napier and The Oasis in Cardiff for other people seeking sanctuary to access.

Members of County of Sanctuary Pembrokeshire  avoided being interviewed despite many requests from journalists pandering to their egos, seeking coverage of them as saviours or heroes. This was not the narrative they  wanted. They simply wanted to be friends and neighbours. 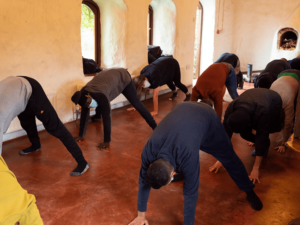 We in City of Sanctuary believe this is an important story to be told. It is a powerful story which reflects some of our key principles including “Create opportunities for relationships of friendship and solidarity between local people and those seeking sanctuary” and our Theory of Change which is based on social contact theory. It is a story of neighbours and friends. A story of well-being, gentleness and kindness. A story of courage creating space to laugh and to grow. A story of fulfilment and mutual benefit. An ongoing story of new friendships across Wales and expansion of the number of volunteers for welcome,  as residents were finally dispersed into community accommodation. Teachers are still teaching. Buddies are in daily contact.  Plans are in place to develop Sanctuary Breaks and more Sanctuary Days.

This is a story of change. A story that celebrates sanctuary.

“I have met so many wonderful people who’ve been put through a system which has denied them dignity and control over their lives but they have shared that space to find love, share laughter and joy and to show they care about you – they have amazing capacity despite everything that they have been through.”

Quotes are from members of the Sanctuary Pembrokeshire who wish to remain anonymous.

The many joys of this ongoing tale will fill a book and we invite potential writers to contact [email protected] for a conversation about this. 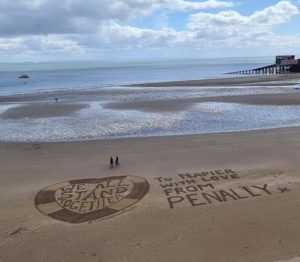 Update May 22nd. The people of Penally continue to show solidarity with people seeking sanctuary who are inappropriately housed. See the photo of beach art on North Tenby beach, created by Heart at a #CloseTheBarracks solidarity rally for those cruelly housed at Napier barracks in Kent  organised by Stand up to Racism Wales.