Together we will Stand Up for Sanctuary!

City of Sanctuary Response to the Immigration Plan

Last week the UK Government announced new plans for changes to the asylum system. Taken in their entirety the proposals represent an attack on the right to seek sanctuary in the UK and will do little to address the systemic, long-term failures of the system that cause such extreme hardship to people seeking sanctuary.

Brief Summary of the Proposals

The Government has announced a six week consultation on these proposals, through an online platform where organisations and individuals can submit their input up until 6th May. You can also see the questions in advance here.

Our incredible partners at Asylum Matters have published guidance for organisations and individuals who want to respond to the consultation and will be holding a webinar. City of Sanctuary UK will produce a brief appendix with some specific messages on welcome and the importance of City of Sanctuary values/principles.

Whilst we believe it is important to submit a consultation response if you are able to, we need to be realistic and realise it is unlikely to achieve the changes we want to see. For anyone wanting to engage with the media on the proposed plans please check out the IMIX guidance here.

Appalled but not disheartened

We are appalled by the plan, but many of us who have worked in the refugee sector for many years will recognise that many of the proposals are not new; they are re-runs that were either proven to be unworkable, or have been prevented by legal challenges. The plans will do nothing to address the root causes of why people put their lives at risk trying to cross the Channel, or the backlog of people waiting in inhumane conditions for a decision on their claim for asylum. They will make an already broken system even worse.

During the coming months we will continue to mobilise behind specific campaigns on the proposals which are led by partners and the existing coalitions. e.g. Families Together etc. We know it is going to be challenging with the current Parliamentary arithmetic, but we are determined to reach out to parliamentarians from all parties to emphasise the vital importance of a humane and welcoming asylum system. As part of these efforts we will continue to work with the City of Sanctuary Local Authority Network to increase awareness of the impact these proposals will have on increasing destitution.

We are not disheartened though, in fact the opposite! We are more determined than ever to continue our efforts and plans to create a welcoming environment that makes negative asylum reform as difficult as possible and to achieve our ultimate longer term goal of bringing about positive change.

We will not let these Government plans distract us from our vision.

1. Build a counter-narrative to the negative rhetoric;

Over the past few months we have been involved in cross-sector work,  led by IMIX, on developing an audience strategy and common narrative. This work aims to support the sector work to win public support through uniting our supporters and reaching the so-called ‘anxious middle’, or most importantly the ‘persuadables’ within that segment of people. We cannot underestimate how important we think this work is, and as such we have become to focus our efforts on this endeavour through:- 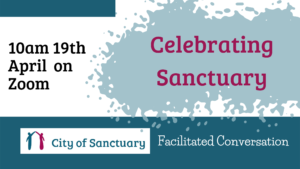 As part of our efforts to focus on building a counter-narrative to the negative rhetoric that is prevalent in the media we are launching a Celebrating Sanctuary week on the 19th April. There will be a facilitated conversation at 10.00am on April 19th at which we will celebrate and promote the stories of welcome from across the City of Sanctuary network and encourage groups to do the same in order to influence a more positive narrative around asylum. Events across the country will also serve as an opportunity to start to build positive relationships with decision makers and the media.  We encourage all groups to get involved in events to promote Celebrating Sanctuary, either that week or in the weeks/months to come. We have developed a toolkit here to support you.

We are prioritising our focus on promoting streams and awards work as we know they are effective and strategic tools by which we can reach the so called ‘anxious middle’ or ‘persuadables’.  See the Facilitated Conversation for further information on Sanctuary Awards.

It is imperative we mobilise support behind the new broad based coalition campaign being launched in May, led by the Asylum Reform Initiative. This new campaign will present a positive, humane and credible alternative asylum system. We will need to call on supporters to stand up for sanctuary, engage with the campaign, support the Days of Action and influence elected officials.

This wider campaign to reform and humanise the asylum system in the UK will take our energy, commitment and sustained engagement over the long term.

We recognise that we face a deeply challenging situation, but we must not be distracted by the current plans. Rather, we need to focus our energies on affecting change in our local communities and standing united so we can achieve the longer term change we want to see in the UK.