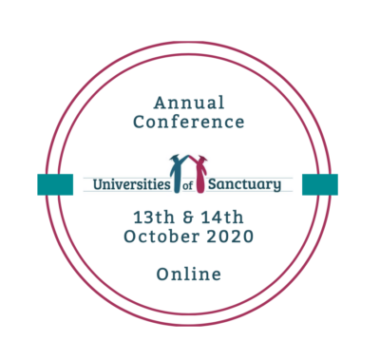 This year the University of Sanctuary conference was an ambitious two day programme of online workshops and webinars which covered a range of topics to appeal to staff, students and practitioners across the network. See links to recorded sessions below. As with many things this year the conference was a little different. We decided to host it online and, despite being the first of its kind, it was hugely successful; we were able to reach many more people than we would have done with an in-person conference and the quality of the speakers meant that many people attended the full programme of events.  Altogether 392 people attended with 27 to 96 (an average of 52) at each session.

Of course, one of the perks of an in-person conference is the ability to network informally with others and offer peer-to-peer support outside of the main sessions. To simulate this, we designed a “Needs & Knowledge Match-up Service” which took place over the lunch breaks or in people’s spare time around the conference dates. This involved participants emailing in with requests for information or a topic which they would like help on from someone who has experienced, and overcome a similar issue. That person was then matched with another person in the network who we approached for this purpose. Some of the topics discussed by the matches included; selection criteria for scholarships, supporting students to volunteer at local refugee-support NGOs, pastoral support for sanctuary scholars and how to facilitate greater regional collaboration.

The conference kicked off with two amazing keynote speakers, Alison Phipps and Daniel Mutanda, who framed the notion of sanctuary in education as both a struggle and a celebration. We should, they said, be prepared to fight for our values and to unite in our differences if we are to ultimately act in solidarity with people who have sought sanctuary here.

We were then able to hear the voices which are, through their own experiences, experts in sanctuary. The first session was lead by sanctuary scholars and was the result of online collaboration events which happened earlier in the year. The events were open to all sanctuary scholars and provided a chance for students to form an informal network, to voice their concerns and to shape the course of sanctuary initiatives at universities across the UK. The students identified challenges and potential solutions and, in this way, directly informed the university professionals who were in attendance. This session was, unsurprisingly, our most well-attended event.

The programme itself covered many areas which we regularly support universities with, as well as some areas in which the stream developing. For example, there were sessions from STAR about how to set up scholarships and how to increase student participation and well as a “starter kit” session for universities which are new to the stream. We were really pleased to work with many partners in delivering these sessions, such as our friends at We Belong, CARA, Coram Children’s Legal Centre and Refugee Week.

But we were also able to host some sessions which challenged our current way of working and sought to improve the scope of the University of Sanctuary stream. For example, we are excited to have been working with colleagues at various colleges across the country to develop a Colleges of Sanctuary stream. This mean were were able to provide a session about how we can form bridges between Further Education and Higher Education, hearing from college students from sanctuary seeking backgrounds as well as from practitioners and current sanctuary scholars who are working to encourage more people from sanctuary backgrounds to consider university as an option. We also held some fascinating discussions around the recent legal challenge on behalf of students with Human Protection with regards to student finance, and how to adopt a trauma-informed approach to ESOL provisions.

The final sessions looked ahead to explore how we could use some of the enthusiasm and passion of the network, and to consider how the stream can challenge itself to step-up in these difficult times. We looked at what support universities would need to ensure they were prepared for the possibility of a student being taken into detention, or threatened with removal. We were incredibly grateful to those with lived experience, to Detention Action, Refugee Support Network and Coram who shared their expertise in this area and helped to shape the discussions that followed. We ended by addressing the “elephant in the zoom”, the inescapable issue of Covid and how the network and our partners can be better prepared to support students from a sanctuary background during these challenging times.

We are incredibly grateful to everyone who participated as speakers, panel hosts, and technical support and as attendees. We would particularly like to thank the sanctuary scholars who shared their personal experiences and whose contributions meant that the sessions were grounded in the needs of people seeking sanctuary. We are hopeful that the discussions we had will continue across the network until we can meet again next year. 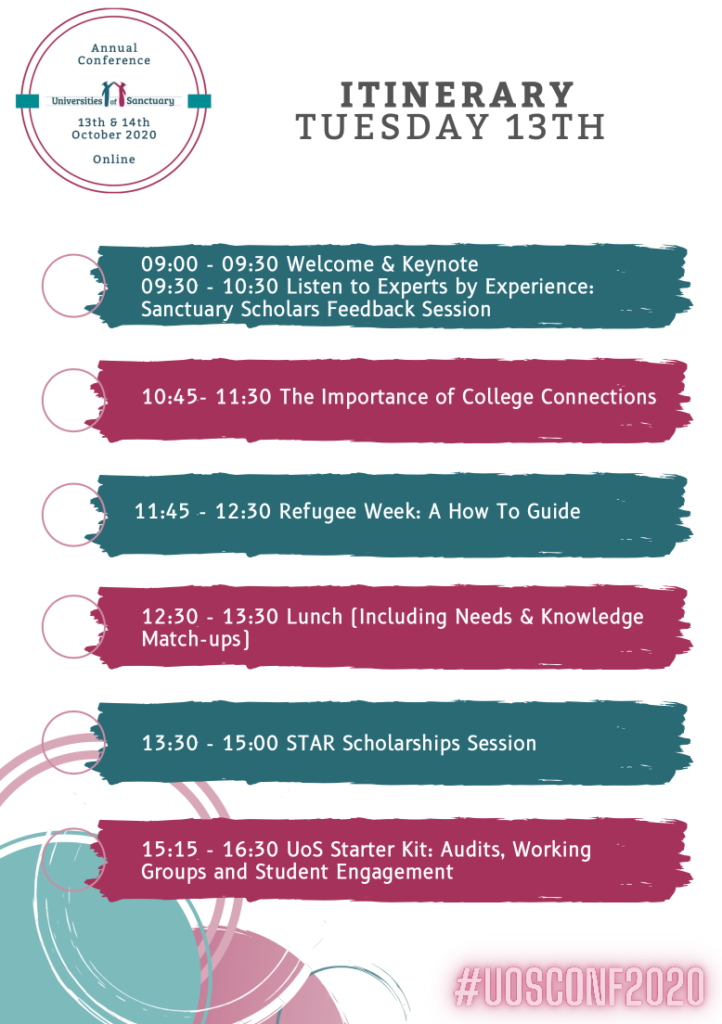 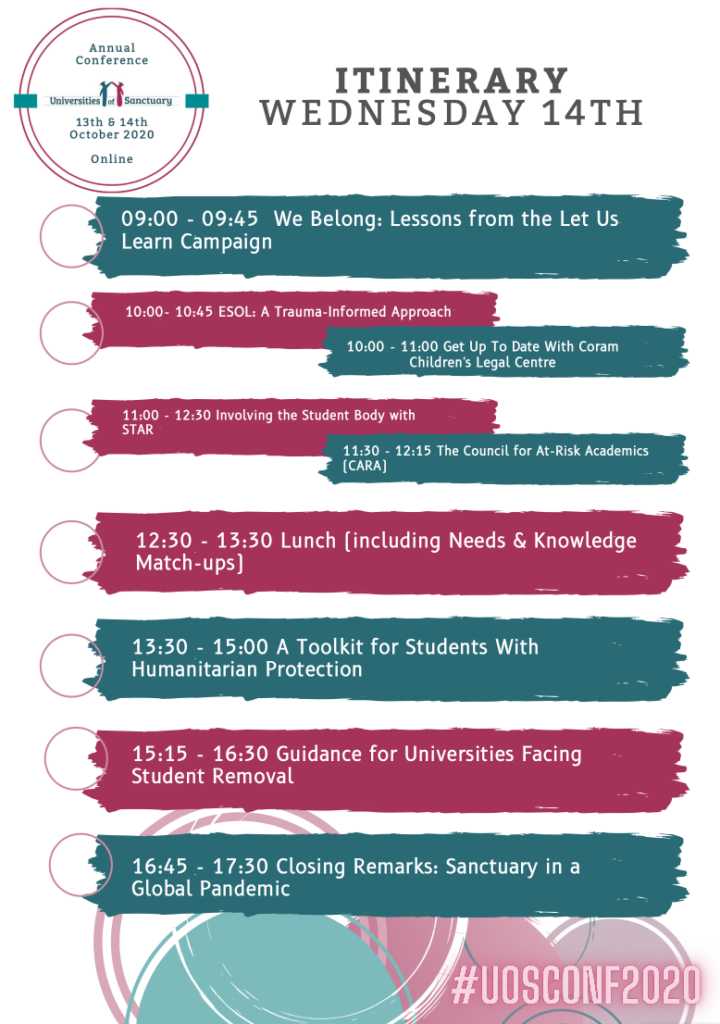