This is a short report from an excellent and inspiring Midlands regional gathering of the City of Sanctuary movement which took place in Wolverhampton on October 20th. People from across the region came together to explore how we can continue to grow the movement, to offer a practice and a culture of welcome and to challenge the UK Government’s hostile immigration policies.

We were welcomed to Wolverhampton by Mark* who has been living in the city 5 months and shared his reasons for seeking sanctuary and his experience of receiving a welcome. Huge thanks to Mark and to everyone from Wolverhampton City of Sanctuary for all their hard work in the lead up to the gathering, and on the day itself, for making it such a success. 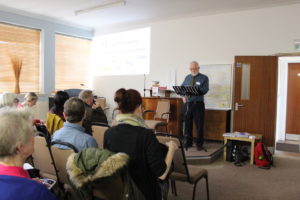 The first panel of the day was chaired by John Catley (Chair, Wolverhampton City of Sanctuary) and made up of two Wolverhampton MPs. 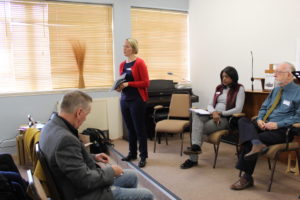 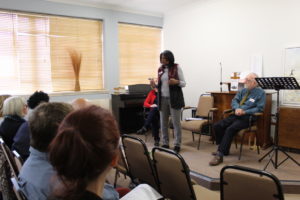 There were several questions asked to the MPs including on the right to work, the plight of the Chagos Islanders, the illegal detention of people who have been tortured, what Labour’s policies would be if they came to power and more. It was clear from their answers that both MPs are advocates of a much fairer, humanitarian-based immigration system and are willing to support the City of Sanctuary movement to ensure this happens. A short-write up from Eleanor Smith’s office can be found here and here is a Tweet from Emma Reynolds.

Lunch was cooked by members of Wolverhampton City of Sanctuary including people seeking sanctuary in the city and was an amazing feast of Syrian soup, salads, samosas, kebabs and much else.

After lunch we heard reports from around the region. It was truly inspiring to hear from City of Sanctuary groups about their efforts and the difference they are making in their towns and cities. There isn’t space here to even summarise all the presentations but the following offers a few highlights and gives an idea of the diversity of activity. 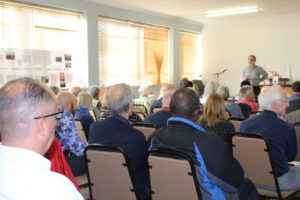 Coventry: CARAG share the huge challenges faced by many of their members and their campaigning and other activities to support people who are destitute and let down by the UK asylum system 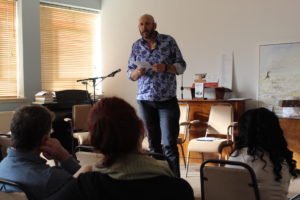 Loughborough: Welcome at the reporting centre; vouchers for food and drink; linking people with services in nearby cities; registered as a charity

Ben shared his own story of involvement in the movement and some of the growth and success from other regions. He reminded groups about the importance of the charter and highlighted some of its key principles and values.

Emma talked about the work of Asylum Matters and encouraged all groups to support the important Lift the Ban campaign that has just launched. 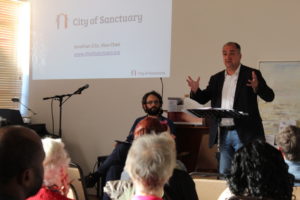 Jonathan Ellis talked about how inspired he felt from the day, and in particular from the local group updates. He also updated everyone on the work of the national board and the upcoming creation of Network Voice – a group which will represent regions and streams at a national level. He encouraged anyone interested in finding out more to contact Ben.

A huge thanks to the nearly 70 people who came to Wolverhampton for this inspiring event and for all of the amazing work you do, almost entirely voluntarily, every day to make the Midlands a welcoming region for all those seeking sanctuary.

If you are based in the Midlands would like to follow up on anything mentioned in this report, would like to get involved in your local City of Sanctuary group, or would like to set up a group where there isn’t an existing one, look at our website (www.cityofsanctuary.org) or contact Ben Margolis at [email protected] or on 07954043674.

* not his real name

(The above file has missing pictures in order to reduce its size for adding here. Please contact Ben if you wish to see the original.)

Campaigning to Lift the Ban