It has been a challenging twelve months for everyone, and during these difficult times our movement has  witnessed attacks on the right to seek sanctuary. Since the summer there was appalling media coverage and political scapegoating of people seeking sanctuary across the English Channel. As we know the negative media coverage is not new and there are often attempts to dehumanise the plight of the people in desperate need of sanctuary. We are acutely aware that media coverage is a major driver of negative public opinion, which then in turn influences political narratives and contributes to the creation of a hostile and unwelcoming environment for people seeking sanctuary. Social media is an echo chamber for wider narratives and an organising tool for the far-right – we need to do more to escape that narrative and tell the positive stories of welcome.

We are inviting groups to hold a ‘Celebrating Sanctuary’ online event during the week beginning 19th April to 25th April to:-

We are encouraging groups to promote the positive stories of welcome from across their communities and to invite key influencers who have been involved in that welcome e.g. teachers, health professionals, faith leaders. We want decision makers to be aware of the broad based alliances and support that there is for people seeking sanctuary. As ever, in keeping with our network principles, people seeking sanctuary should be included as speakers and their contributions recognised, and of course also actively involved in planning and decision making.

We see the ‘Celebrating Sanctuary’ event as a pre-cursor to Refugee Week events (June) and the 70th Anniversary of the UN Convention Relating to the Status of Refugees (July). Moreover this could be a practice/planning event – in the hope that some face to face celebrations will be possible in the summer. 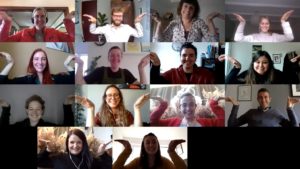 As always there is no pressure on any group to run an event in April, but in these difficult times we feel it offers a further opportunity in 2021 to proactively and sustainably promote a positive narrative. The CoS UK team will provide support to groups to plan their event by providing resources and guidance.

Your local Celebrating Sanctuary event doesn’t have to be tied to any campaign asks, or necessarily focus on campaigning against measures we may see in new legislation introduced around April. It is more a response to the need to double our efforts to make the stories of welcome heard, and the benefits of having people seeking sanctuary living within our communities recognised.  A positive narrative building positive attitudes towards people seeking sanctuary is also part of the wider movement’s efforts in the longer to term to bring about change to the asylum system.

Events can be as small (or large) as you would like but we would encourage you to reach out to your local media to further promote the stories of welcome that you are sharing (thanks to IMIX we will be offering media training in March).  The key messages we would like to convey:-