Lift the Ban wins award but the campaign continues – update 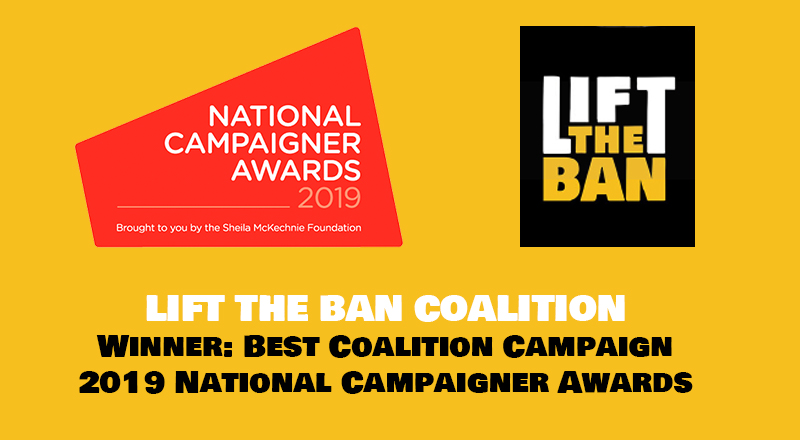 Congratulations to the Lift the Ban campaign for winning the Sheila McKenzie award for the best coalition campaign in 2019. Here is a link to the Asylum Matters blog about the award.

But we cannot be complacent until the right to work for people seeking sanctuary is won.

The aim of the Lift the Ban campaign which is supported by a wide coalition of partners is to win the right to work for people seeking asylum, and their adult dependents, unconstrained by the shortage occupation list after six months of having lodged an asylum claim or further submission. 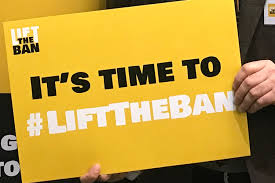 Thank you to everybody who has been involved with the campaign so far.  We encourage all our City of Sanctuary groups across the network as well as our partners across sanctuary streams work to continue supporting the campaign. A key resource to support you is the Lift the Ban activism pack which you can find here.  Lift-the-Ban-Activism-Pack

The campaign has succeeded in placing the issue of asylum seekers right to work firmly on the public and political agenda and now enjoys the backing of cross party parliamentarians. Numerous MPs have tabled parliamentary questions on the campaign and many have heard directly from experts by experience at a campaign parliamentary reception as well as the Sanctuary in Parliament event in November last year. We are continuing to call on MPs to get behind this issue and urge our supporters to talk to or write to their MPs if they have not already done so.  Support from Conservative MPs will be particularly important, but all MPs have an important role to play in raising the issue in Parliament, putting pressure on the Home Secretary and helping to grow our support base. Hearing directly from you could make a big difference as they have a duty to represent the voices of their constituents in Parliament.   The Lift the Ban activism pack also provides support for engaging your local council to support the campaign, with additional template resources available on the Lift the Ban website – and we’re delighted that a growing number of councils are passing motions in support of the issue and joining the coalition. 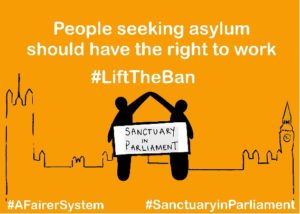 Beyond Westminster the campaign has secured the backing of a number of opinion formers and influential voices including the Scottish and Welsh governments, the United Nations special rapporteur on extreme poverty and human rights, the Equalities and Human Rights Commission and a group of 39 celebrities. There has also been significant media coverage and public opinion is on our side.

There is now a number of clear, public indications from ministers that the Government is listening to the arguments and actively considering a change in policy.  For example, in response to a question in parliament on the subject in December 2018, the Home Secretary has said “this is one of the areas that I would like to review”; while in response to the Westminster Hall debate in October, the Immigration Minister told MPs she is “listening very carefully” to the arguments which have “much merit”. This view was further underscored by an unexpected reference within the Government’s immigration white paper, published at the end of 2018, which stated: “…That is why the Government has committed to listening carefully to the complex arguments around permitting asylum seekers to work. We are considering all the evidence to ensure that our policy of right to work safeguards the integrity of both our asylum and immigration systems.”

The Home Office’s recent commitment to undertake a review of the existing policy provides an important opening for the coalition’s campaigning efforts. It is important that we continue to mobilise to demonstrate popular public support and also where possible encourage our allies to engage with the review. The review could result in a change to the policy – something ministers could do readily and quickly, without the need for legislation.