On the 26th July 2017 something extraordinary happened in Colchester. A motion was put forward to the Cabinet meeting of Colchester Borough Council by Cllr. Rosalind Scott. Both Maria Wilby and Rahaf Alghalyoun spoke in support of the motion. Two members of Colchester Sixth Forms Friends not Foes group also spoke about the projects they run with the refugees. The Council chamber were very moved by the great things happening in Colchester. 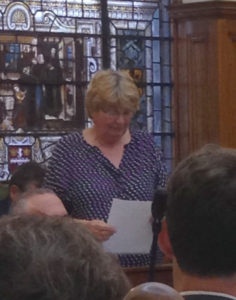 er the years. Most recently the Council gave unanimous support to instigate the Syrian Vulnerable Persons Resettlement Scheme working with Essex County Council, public sector and voluntary sector partners. We are proud of our achievement in welcoming 12 Syrian families over the past 18 months.

In order to strengthen our commitment to those who face the ordeal of being separated from their families and home this council pledges to:

– continue to do all in its power to welcome and assist refugees and all those forced to seek sanctuary in our Borough
– ensure services and resources are accessible, including by signposting, translation and advocacy
– acknowledge the pledges of institutions, businesses, individuals and families across Colchester
– declare ourselves as a Borough of Sanctuary, following the examples of other local authorities already signed up to the City of sanctuary principles.

The motion was debated at length and passed without amendment.